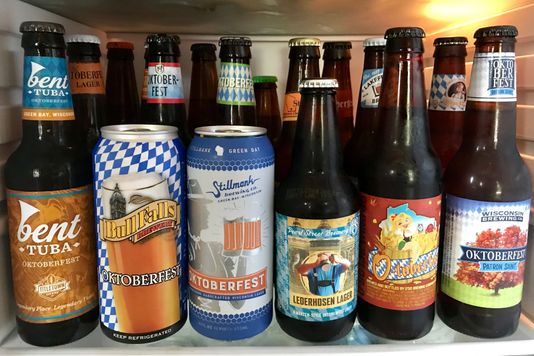 Oh, and a fourth: It should finish clean.

With that in mind, I did a blind tasting of 18 Oktoberfest beers from Wisconsin breweries.

I won't claim to be a definitive voice of all things Oktoberfest-style beers. I've never been to Munich, Germany, for the annual festival, though I do look forward to the return of these beers each year. But I've tasted a few beers in my day. In this tasting, there were a few that really stood out, and others.

At least to my tastes.

If you don't like the results, do your own blind taste test. Seriously. It's easy to overlook the nuances of this style of beer until you sit down and pay attention to what you're drinking.

My next-door neighbor Justin Hammer, who happens to be a homebrewer and recently completed the Beer Judge Certification Program classes, assisted me in the tasting. In addition to pouring beers, he sampled and took notes, used an app to check beer colors, regularly put his hand over the top of his glass, swirled and sniffed, routinely called out malts he tasted, and so forth.

Me? I was just asking myself how likely I would be to order each beer at a bar or commit to an entire six-pack.

We then each made our pick six and compared notes. For what it's worth, here's a summary of our findings.

Three that stood out

Central Waters Brewing and Bull Falls Brewery nail it with their 2018 offerings, from strong malty flavor to clean finish.

Both are solidly in the dark gold to coppery red colors. Both provide good malty aromas ahead of tasting and deliver a creamy mouthfeel.

These are beers that are satisfyingly rich in flavor but clean enough to be enjoyed repeatedly during an afternoon into an evening of festival fun.

Ale Asylum Oktillion came in with just a pinch less of malty flavors, but otherwise fits the bill as a festival-worthy brew.

Six more we liked, even if we didn't completely agree

I rounded out my six-pack with beers from Ahnapee Brewery, Hinterland and Potosi Brewing.

Again, there wasn't really a huge drop-off here. These beers had a bit more bite of hop bitterness or a tad less malt flavor or a hint of an aftertaste.

If we were trying to agree on a single six-pack, I would have argued most passionately for Ahnapee and Hinterland. I had both ranked ahead of Ale Asylum because they delivered more malt flavor.

Almost made the final six-pack

We both gave high marks to Foxtoberfest (Fox River Brewing Company) and Lakefront Brewery Oktoberfest Lager. Hints of funky flavors near the finish and a slightly higher bitterness kept them out of the finals.

A few surprises along the way

The biggest surprise was the absence of Staghorn (New Glarus Brewing) from both our final six picks. There was a noticeable caramel flavor that, while not terrible, just isn't something I want in an Oktoberfest beer.

O-toberfest (O'so Brewing) is another beer I expected make my final six, but it also gave off a few caramel flavors and a bit more hop bitterness than desired.

This is where doing a blind taste test probably helped me cast aside any unconscious bias toward the beers I tasted. Especially those, like Staghorn and O-toberfest, that are on my short list of favored Oktoberfest beers.

Of course, I will gladly continue tilting pints of both. But with the help of the blind taste test, I've now added more Oktoberfest beers to my favorites list.

What I would do differently? And other observations

The first thing I would do is include Capital BreweryOktoberfest. I didn't notice my oversight until Monday morning. And I was kicking myself. It is another Oktoberfest that's on my short list of recommended beers, so I would have been curious how it would rate in a blind test.

Because we were attempting to taste 18 beers in one sitting, it meant keeping pours under 3 ounces each. I'm no longer capable of downing that much beer in a day and even if I was, by the end you could have handed me a Night Rain (O'so) and I wouldn't have noticed.

I would be curious to try full pours of these beers (over the course a couple of weeks) and compare notes.

Perhaps the biggest takeaway for me, other than that I'll need to budget more money and time for Oktoberfest beers next year, is a reminder of the joy of appreciating what you eat and drink. Taking the time to savor the melding of apple and cinnamon flavors in a piece of warm pie or the bready flavor of your beer doesn't make you a foodie hipster doofus or beer snob. It helps you make informed choices of how to best spend your money.